Put sugar, honey, and water in saucepan. Stir until sugar is dissolved. Cook to 300 degrees. Remove from heat. Add butter and peanuts. Stir just enough to mix thoroughly. Pour into very thins sheets on a well-greased platter. Cool. Break into pieces to serve.

Make your own air freshener:

To give your whole house a wonderful Christmas smell cut up some oranges, cranberries, whole cloves and cinnamon put in a mason jar fill with water and put on a cup warmer. 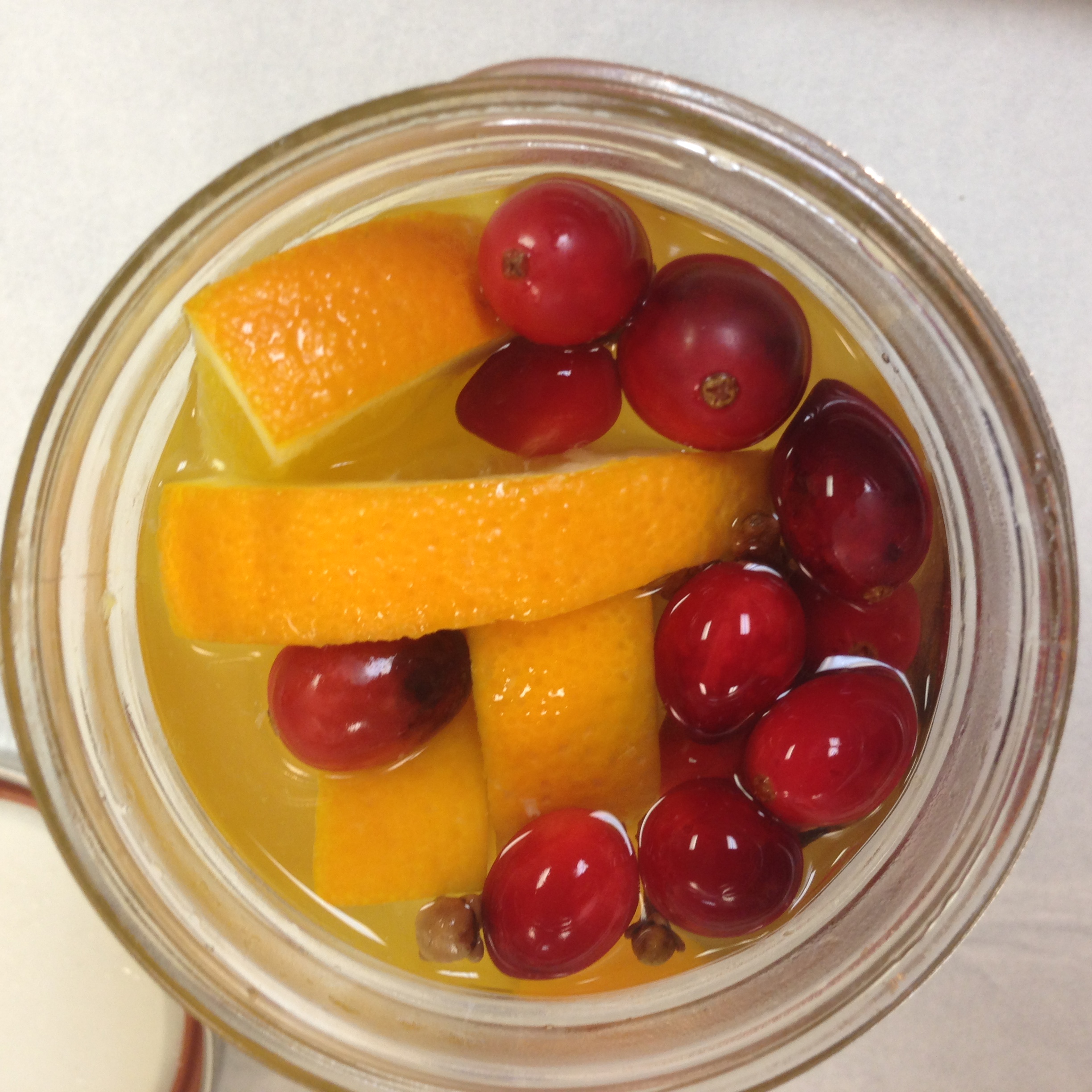 Some other ideas to put in the jars are, pine needles, rosemary, fresh mint leaves (peppermint, spearmint etc).  Try your own ideas and help your house smell wonderful!

Whisk the cocoa powder, water and honey together in a saucepan. Simmer over medium heat for 5 minutes making sure it is well mixed and thickened.  Let cool and transfer to a glass jar keep in the refrigerator.  Goes well with Nut Milk
In a small saucepan, whisk together the cocoa powder, water and maple syrup. Bring to a slight simmer over medium heat, being careful not to burn and whisking constantly,  cook until well mixed and thickened about 4 minutes. Remove from heat and let cool. Transfer to a glass jar and refrigerate. This syrup is very rich and thick, a little goes a long way.

Put all ingredients in a blender and blend till smooth.

Baking is the method of cooking using prolonged dry reflected heat in an oven, also in hot ashes or on hot stones. The baking process does not require any fat to be used to cook in an oven. Dry baking vegetables in their skins is simple, the vegetable is packed in a pan or laid on the rack of a hot oven until just tender when poked with a fork, it’s the best method to preserve vitamins and minerals. Generally used for carrots, onions, parsnips, potatoes, squash, sweet potatoes and turnips. Can be used as an alternative to the usual cooking method of deep-fat frying.

Whole vegetable, washed poked and oiled. Optional: Wrap in aluminum foil (lined with enough oiled parchment paper so vegetables do not come in contact with aluminum foil). Bake in hot oven till done. Size of vegetable will determine how long.

Boiling is the method of cooking food in liquid, any water-based liquid such as stock or milk, at a temperature of 212

degrees F. at sea level, The boiling point decreases about 1 degree F. for every 500 feet of elevation. At the correct boiling temperature large bubbles rise rapidly and continually, so that all of the liquid is agitated. This method is the least desirable for cooking vegetables. Boiling is used in making soups & sauces. If you must boil, boil at a high temperature, for the shortest possible time, in the smallest possible amount of water (minerals will be saved).

Simmering is the method of cooking in water at a temperature of 180 degrees F. to 210 degrees F. or below the boiling point of water.. All water from boiling or simmering should be used not thrown away.

Poaching is the method of cooking by slipping food into hot liquid to cover. The cooking liquid moves but scarcely bubbles.

. Deep-Fat Frying is the method of cooking food immersed in hot fat at a temperature of 382 degrees F. & 390 degrees F.. Unrefined coconut oil is heat-stable with a smoke point of 446 degrees F. the highest of any unrefined vegetable fat. Unrefined virgin olive oil is heat-stable with a smoke point of 410 degrees F.. These are the two fats that I recommend for deep-fat frying. It’s always wise to take care and keep the oil below the smoke point. These oils may be used over and over. I don’t deep-fat fry allot, when the oil is cool enough to handle I strain and store in a quart canning jar and use it for the fat in all my cooking. I don’t waste a drop. Deep-fat frying is a satisfactory way to retain most of the food values. The quick cooking permits little loss. Only with good fats and correct temperature.

Parboil is the method of cooking by boiling uncooked food until partially cooked. If you are going to bake, broil, grill or deep-fat fry the vegetable parboil first, you can finish cooking your partially cooked vegetables in the oven, on the grill or in the hot fat. Its great to have some parboiled vegetables in the refrigerator ready to be used as instant food. Using a toaster oven

you can bake or broil your parboiled vegetables at work for a fresh hot meal.

Steaming isthe method of cooking in the steam generated by boiling water. This long, slow process gives the starch cell time to swell and gelatinize.Always cut dense vegetables like potatoes and carrots in small pieces, then they will cook more quickly, cut softer vegetables in larger pieces. Using one of the cooking utensils described below:

Pot with steam pan (a utensil consisting of a lid and two pots, one of which fits partway into the other, has holes and keeps food separate from the boiling water in the lower pot. With lid in place, steam is in direct contact with food in the top pan which results in a moist texture to the food)-Place water in bottom pot to within 1-inch below top pan. Set steam pan (with holes) on top, fill with vegetable and put lid on. Bring to boil, the steam will cook the vegetables. When vegetables are done, uncover and remove immediately to stop cooking.

Cast iron skillet (if steam basket not available) cover bottom of pan with water, add vegetable, bring to boil, simmer on low till vegetable is done, if water is gone before vegetable is done add enough water to finish cooking. Water should be gone when done.

Waterless Cooking of fresh vegetables is any process where no water is added, the water in the vegetable does the cooking. You can buy water-less cookware. Because neither heat nor steam escape the vegetable is tender in a very short time. Mineral & vitamin loss is almost as low as in baking.

termed broiling (the pan that holds the food is called a broiler pan).

Grilling or broiling handle the vegetables the same way. I like to parboil my vegetable then put in a bowl & stir the fat and seasonings in, then place on appropriate cooking utensil and cook till golden brown.

Sautéing or Pan Frying is the method of cooking food, that uses a small amount of fat in a pan over medium=high heat. (sauté literally means “jumped”) the ingredients are quickly moved around in the pan no lid is used. Vegetables that are sautéed are browned while preserving their flavor, texture and moisture. Ingredients are usually cut into pieces or thinly sliced for fast cooking. I like to finish by deglazing the pan’s residue with a little water to make a sauce.

Searing is the method of cooking that only browns the surface of the food. Unrefined virgin olive oil, unrefined coconut oil or clarified butter are commonly used for sautéing or searing but most unrefined fats will do. Regular butter will produce more flavor so will full flavor coconut oil if you enjoy the light coconut flavor.

Stir-Frying or Asian Style Sautéing is the method of cooking thin fragments of food in a few moments. This cooking procedure is always done in a wok and was designed to conserve fuel. High heat and brief cooking are the qualities of this method. The result is tender crispness and lots of bright color in the vegetables. Cut vegetables so as to expose as much surface area as possible, so they cook quickly.

Stewing is a combination of vegetables (such as carrots, potatoes, turnips, peppers, onions and tomatoes, etc.) that have been cooked in liquid and served in the sauce that was created. Seasoning and flavorings may also be added. Stews are typically simmered, not boiled, allowing flavors to mingle.

Stews may be thickened by reduction or with sprouted flour, either by coating vegetables with sprouted flour before searing, or by using a roux consisting of equal parts of butter and flour. Thickeners like cornstarch or arrowroot may also be used. Stews are similar to soups, generally, stews have less liquid and are much thicker and require longer cooking over low heat and my stews are distinguished by the size of the vegetables, they are cut much larger. Stews are thick enough to be served on a plate, the sauce is thick like a gravy. The difference between stewing and braising is ingredients and time for cooking. Stews are filling and stand on their own as a main dish.

Braising is the method of cooking by browning the vegetables in a small amount of hot fat. Then cook slowly, in a covered pan, on top of stove or in oven with a very small amount of liquid, usually one vegetable and served as a side dish.